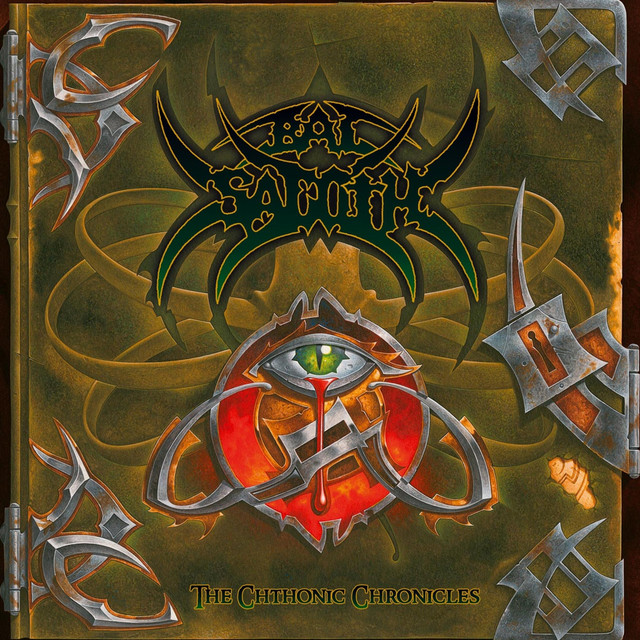 Unfettering the Hoary Sentinels of Karnak Lyrics Meanings
by Bal-Sagoth

Fragmentary delusional recollections from within the confines of Grimm's Hold Sanitarium:
When Blackthorne returns from his expedition to Tiahuanaco and the Peruvian jungle I shall duly tell him of the catalyst which compelled me to those cursed black vaults in ancient Ur, should Hildebrandt allow me another visit. Yes... Giza, Karnak, Thebes... I see them now once more! In the grip of a waking dream, I walk those restless sands again. Egypt... here my journey began, and here I took the first steps towards destiny... and damnation.
(The events recounted here take place before "The Dreamer In The Catacombs Of Ur")

From the expeditionary journal of Doctor Ignatius X. Stone:

Giza, Egypt (March 17, 1890)
The heat here is damnably oppressive, and all day the omnipresent sand has been whipped up by an impudent wind, making progress all the more difficult. At dawn, I pinpointed the location of the Great Pyramid's secret chamber which my old friend Professor Caleb Blackthorne and his benefactor Lord Blakiston had discovered several months previously, but ingress to its concealed depths was denied me by a partial collapse of the age old edifice's stone ceiling. Excavation is evidently impossible, lest more of the mighty tomb come crashing down about us. At any rate, Blackthorne has studied the incredible inscriptions within that hidden alcove exhaustively, and in truth my own interests lie elsewhere in this desolate sand-flayed landscape. The traditionalists believe that, in keeping with Egyptian tenets, only mundane things such as new air shafts and ever more ornate sarcophagi are yet to be discovered deep within the tunnel networks of these cyclopean monuments. Feh! If only they knew the true extent of this great cosmic puzzle! They are as fools who view a tapestry in a darkened room by the light of only one candle, seeing only small sections illuminated one by one, and refusing to recognize or connect the darkened and unseen areas to the entirety.
Working from the geometric calculations which I prepared before our arrival here, I have studied the alignment of Cheops, Chefren and Mykerinos. It is as I suspected. Tomorrow, I leave the the imperious and hoary mausoleum of Khufu and seek answers within the Great Temple of Karnak...

Karnak, Egypt (March 18, 1890)
What oblations to the grim chthonic deities of the ancient world were once offered solemnly beneath the stygian skies of this sweltering place, I wonder? What sublime power awaits the aspirant, the querent who dares seek answers in those shadowed places where men of lesser fortitude fear to gaze? Blackthorne often berates me for what he calls my preoccupation with the arcane, the occult, the sinistrous lore of the chthonic... he insists no good will come of such delving into nighted realms. Ha! The path to elucidation is seldom devoid of thorns, the road to knowledge rarely free of perils! I seek enlightenment, and by the erudite tongue of Herodotus, I may have found it! Ancient tradition of this land has long spoken of strange flashes of light emanating from the depths of pyramid passages and temple catacombs. Over a thousand years ago the Arabs wrote of the transient walls and hidden chambers of these monuments; of secret doors moved by an unseen force and of implacable sentries who guarded the secrets of the temples with dour tenacity. What I found this evening gives credence to all that and more. Is the lore which I discovered carved into the ancient stone of Karnak's temple the next fragment of the cryptic conundrum which I have dedicated my life to solving? The Coptic papyrus states that, upon the walls of the pyramids and the temples were inscribed the mysteries of science, astronomy, geometry and physics; inscriptions of unknown peoples and lost civilizations whose lore was carved into the stone to preserve it from the ravages of the great deluge. The surviving knowledge of long forgotten antediluvian races!
Aye, prudent Surid, heeding the warnings of his priests, erected certain repositories of long forgotten knowledge to withstand first a great flood, and then an all-consuming fire which was prophesied would come from the sky. Masoudi, in the tenth century, described automata; titanic guardians of stone and metal which were placed to guard the treasures and the entombed lore, and which were tasked to destroy all those deemed unworthy, all those who dared enter the chambers unbidden. I see them! The hoary sentinels of Karnak unfettered! Rising from their sandy tombs to smite the intruder, the raider and the interloper with righteous fury! And what is this... was there once a glimmer of life within the sightless stone eyes of the Theban guardian? Does the silent watcher at Giza even now descend from its granite dias to once more stalk the shifting sands on carven claws? Hu! Horem-akhet!

The alignment of Cheops, Chefren and Mykerinos revealed,
Chthonic lore concealed in Khufu's imperious mausoleum,
By the erudite tongue of Herodotus, I have found the answers,
Arcane secrets inscribed in the ancient Coptic papyrus,
The Pyramid's legacy compells me to these dark discoveries,
The Theban guardian rises from its sandy tomb to meet us,
The Silent Watcher stalks, behold the Sentinels of Karnak!

Thebes, Egypt (March 19, 1890)
Niut-Ammon! Lucidity has reasserted its blessed hold upon me. I understand now the true nature of that knowledge which was revealed to me deep within the shadowed confines of Karnak's timeless temple. Telluric energy, harnessed by the ancients... triggered by lunar rays and solar radiation, channeled to impart static charges to rock strata and lines of natural power running through the earth. Neuro-electric energy generated, developed, creating light, separating inertia from gravity! And what more? The fourth state of matter, forged countless millennia ago in the hearts of burning stars... fettered, channeled, for creation and destruction! The secret of the great monuments of the ancients! Yes, secrets... answers. A rogue celestial body passes inside the orbit of the moon, becoming a captive of the earth's gravitational field. The world tilts upon its axis, its revolution slows, the planet shifts farther from its parent star... one of many such cataclysms. Asteroid strikes, floods, firestorms, the sky swathed in a veil of darkness through which the sun's light cannot pass, great ice-ages enshrouding the globe. And what is this? The forces of evil, of chaos... servitors of the sinister gods of the universe... manifesting upon the tellurian sphere? What dire agents of malignity were unleashed upon mankind? Bringers of carnage and destruction, pestilence and decay! The Z'xulth!
Secrets once known by the forgotten peoples... ancient Atlantis... time-lost Lemuria... Hyperborea, Ultima Thule, utopian Atland and its enduring legacy. Fragments, memories... descendants... the Incas, the Aztecs, the Maya, the Egyptians, the Greeks, the Britons, the Frisians, the ancient Sumerians. Yes, it is clear to me, like a diamond worked to perfection in the skilled hands of a master craftsman. The sigils and glyphs I beheld carved into the ancient stone of Karnak (which I somehow understood implicitly), the visions I experienced within the temple, it is all quite clearly compelling me to the next stage in my grand voyage of enlightenment. According to the inscriptions, the truth, the key, awaits me within the ziggurats of ancient Sumeria. I hear the call of the ancients, beckoning me to that aeon-veiled place across the unforgiving sands. We shall depart at once. I feel sure I shall find that which I seek between the two rivers, at the place of the seven cities. Yes, I shall surely meet my destiny within the mystery-haunted catacombs of ancient Ur...

(From the pyramids of Egypt, to the ziggurats of Sumeria, my grand journey of enlightenment must continue. Praise the Ancients!)

The Keeper of the Ancient Lore of Ur:
Hearken to the warnings of the Ancients... tread softly those sacred and unforgiving sands. Do not break the seal of the seventh city!

The Chief Cultist of Ur:
The Gate must not be opened. You dare not awaken the Dreamer!

Cuneiform tablets bear a grim, darkly portentous warning,
Sumerian catacombs astir with vile Chthonic horrors,
The lore of Babylon inscribed in stone as old as Atlantis,
Glyphs and sigils now compell me to the ziggurats...

In a waking dream, I hear the call of the Ancients. I shall find that which I seek between the two rivers, at the place of the seven cities... in the Catacombs of Ur!

(For the outcome of Doctor Ignatius Stone's expedition to Ur, see "The Dreamer In The Catacombs Of Ur" on the fifth Bal-Sagoth album, "Atlantis Ascendant".)

Post your thoughts on the meaning of "Unfettering the Hoary Sentinels of Karnak".

What Does Unfettering the Hoary Sentinels of Karnak Mean?