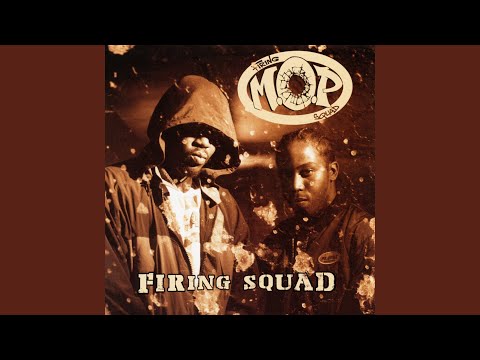 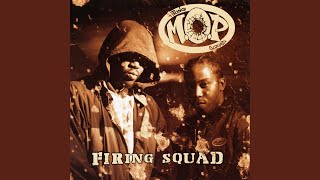 [Chorus:]
This is what you waited all year for, the hardcore
Firing Squad! Firing Hard!

I'm top of the line, realistic and rugged never smooth
Ring ding! Ring ding! M.O.P. coming through
Guns and roses hit 'em hit 'em up kid
For real!
Say what, say what, say what?
I'm packing blue steel
Drama lord, ice master, quick to blast ya
Thoroughbreds with hearts cold as Alaska
F A G's get bust down to they knees
M.O.P. to the death kid
Yeah, cock then squeeze

[Lil' Fame]
I'm here to make moves and never fake moves
I like to break fools in half, put 'em on they ass
If they never paid dues
It's time! To get rid of your fly talk
Fuckin' with Fame, you'll be the next stain on the sidewalk
I make 'em simmer down whenever I'm in the town
Speak for my love thug niggas in the ground
I'm dedicated, never been over-challenged
My over-violent lyrics will knock you off of balance
I'll wet MC's like Vietnamese
But yet they freeze like coke
When they provoke me to squeeze
Lil' Fame represent the turf
With thugs so hard they put scars on the face of the Earth
Out to hit ya! Split ya! Hell when I get ya!
Fuck a frame, I'll blow your ass out the picture
So keep your eyes focused on this overdose of dopeness
Coming through to a hip-hop spot near you

Yo, it's the world's famous niggas born to kill
From the ill side of town, so you best get your steel
It's ill, the street life is real son
You shouldn't have to go get a fool
Stick to ya guns!
Now! Lifestyles of a ghetto child
Representing for ill crews, and
Kid I ain't got nothing to lose
I been there, to my peoples up in them cells
Up in them jails, ringing bells
Clack Clack!! Salute!! Raise hell!!

[Billy Danze]
I believe you're dope (dope) yep (yep)
But you can't fuck around (fuck around)
And take a lock to half actual natural sound
Damn bad! Motherfucker we didn't leave
We just laid back in the cut
Stuck some shit up our sleeve
Please, we don't roll deep, we squeeze
But make to flip
I'll have enough niggas around to sink a fucking ship
What! I feel is What! I do
And G I see I'ma have to straighten your ass out too
I wish I would let a nigga take mine
When my niggas is niggas that live on the front line
The hardcore, raw Brownsville B-Boy
Quick on the draw like the late great Prince Leroy
When my nigga was on the scene
More ammunition passed through his hands than the average Marine
From the Hill part fool where they still start the ruckus
Firing Squad!!
Kill a whole heap of you motherfuckers

What Does Anticipation Mean?