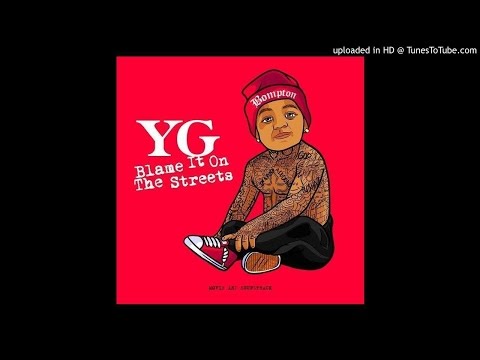 Blame It on the Streets Lyrics Meanings
by YG
ft. jay 305 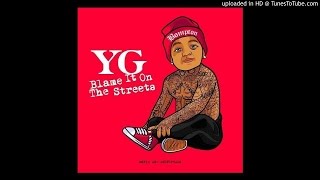 Blame It on the Streets Lyrics

Shootouts in broad daylight, South Central zoo life
Young nigga goin' hard, hustle all night
Mama prayin', tellin' God I don't live right
Fuck right, go left, catch a damn strike
Felonies can't go to police
Probation catchin' cases, prayin' on my (static)
Lord, why they got me out this way?
Lord, I gotta buy another AK
Fresh out, I need money in the worst way
Get a job, hell nah, call my homie Ike
Told me, pull up, I'ma get you right
Diamond chain, gold ring, now I'm sittin' right
Like biz, bad bitch, real boss tie
Took a chance, now I'm ballin' off the street life
It's just in me, my nigga
Don't blame me, blame the ghetto, that's where I'm livin', my nigga

Aye I'm a West Side, Tree Top gang member
Don't blame it on my mama, don't blame it on me
Yo those fades I done took, peoples' safes I done took
And if I caught up with this shit, I'm gettin' booked
Oh, oh no, I don't wanna go to jail
But if I got to I swear to God I won't tell
Hit the bounty nigga, you ain't gotta take no fade for me
Phone call, [?], nigga I can spread for weeks
My pops mad at me, my mama all worried
So she bail me out, typical black male story
Her friends wasn't supportin' 'cause they know I'm in the streets
I told her,don't blame it on my mama, blame it on me
I got Piru [?], where I'm from, that's regular
I don't do enemies and I don't talk on a cell
And mama asked why I sag and talk with so many Bs
No questions, mama, blame it on the streets

What's happenin'? West Side, Jay 305, I'm demanding respect
You got a problem with that, I 'on't know what to say
Blame it on the streets
Niggas like me only come once in a lifetime, nigga
So while you in the mothafuckin'
Presence of a gangsta, nigga
You better bow down and walk off

Blame It on the Streets Meanings

Post your thoughts on the meaning of "Blame It on the Streets".

What Does Blame It on the Streets Mean?

I Need My Girl
by The National

Dear Younger Me
by MercyMe

Made You Look
by Meghan Trainor

Do I Wanna Know?
by Arctic Monkeys

Shut up My Moms Calling
by Hotel Ugly