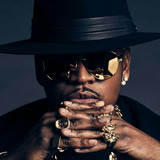 Ne-Yo is a well known Pop artist from Las Vegas, NV, United States, and was born on Thursday 18th of October 1979. According to our records Ne-Yo has recorded approximately 2,096 music tracks and released 20 albums since the beginning of his musical carrier in 2006.

So Sick
by Ne-Yo

Because Of You
by Ne-Yo

Stop This World
by Ne-Yo

Walk Through The Fire
by Yung Bleu ft. Ne-Yo

What If
by Ne-Yo

Stay Down
by Ne-Yo, Yung Bleu

Handle Me Gently
by Ne-Yo

Turn All the Lights On
by T-Pain, Ne-Yo

One In A Million
by Ne-Yo

Make Me Better
by Fabolous, Ne-Yo

Get Together
by Gang Starr, Ne-Yo, Nitty Scott

0
7
Ain't Thinking About You
by Ne-Yo

That's all the Ne-Yo songs we got.

That's all the Ne-Yo albums we got.