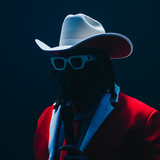 T-Pain is a well known Hip Hop artist from Tallahassee, Florida, United States, and was born on Monday 30th of September 1985. According to our records T-Pain has recorded approximately 2,886 music tracks and released 22 albums since the beginning of his musical carrier in 2004.

I'm on a Boat
by The Lonely Island ft. T-Pain

I'm on a Boat
by The Lonely Island ft. T-Pain

0
8
Have It Interlude
by T-Pain

2
18
Turn All the Lights On - Bakaboyz Remix
by T-Pain, The BakaBoyz ft. Ne-Yo

That's all the T-Pain songs we got.

That's all the T-Pain albums we got.