Fighting the World: An Anti-Authority Anthem from Manowar

Manowar’s “Fighting the World” is the title track of the New York heavy metal band’s 5th album. The meaning of Fighting the World should be immediately obvious, even with just the song title itself.

The self-proclaimed Kings of Metal frequently compose songs with lyrics that can be described as “rock ‘n’ roll worship” and “heavy metal anthems.” This song is about the love of music, in particular, rock music and more specifically, heavy metal.

The lyrical subject matter describes how the band refuses to play by the rules of the sterilized mainstream media. They play by their own rules, they write the music they want to write instead of catering to MTV or other media publications, they don’t turn down for the authorities, they give it all to their loyal, devoted fan base. It isn’t about album sales to Manowar, and this shows in the lyrics of Fighting the World – it’s all about heavy metal and the freedom that comes with the scene itself.

The scene is talked about at length, the brotherhood, and sisterhood that exists between all the fans of heavy metal and the bands themselves. It’s all about that family feeling being elevated with the soaring guitar solos, the catchy, hymn-Esque vocal melodies, and the powerful rhythm section pulsing below – together the sound is quite solid, a figurative wall of noise that is beautifully composed and performed with the utmost passion and sincerity.

Manowar is not a band that plays by anyone else’s rules, and have been the loudest band in the world for decades. This shows in the lyrical content of “Fighting the World.” 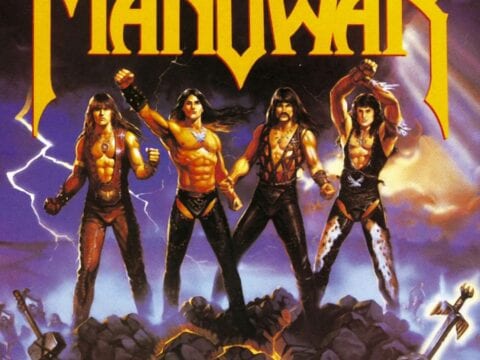 Fighting the World: An Anti-Authority Anthem from Manowar