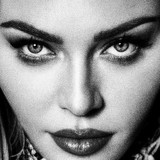 Madonna Louise Ciccone was born on August 16, 1958 in Bay City, Michigan. As Madonna, she is among the most successful music artists of the last 40 years and is often called the “Queen of Pop.” Her music and personal image is recognized for pushing boundaries and regular reinvention. In the early 1980s, songs like “Burning Up” and “Holiday” gathered attention in clubs and on the radio. Other hits with lasting pop legacies have included “Vogue” and “Express Yourself.” Madonna has sold more than 300 million records and has been recognized as the best-selling female recording artist ever. She has had 21 songs reach the top spot on the Billboard Hot 100 chart.

Hung Up
by Madonna

Into the Groove
by Madonna

8
8
Into the Groove
by Madonna

3
12
Express Yourself
by Madonna

9
13
Open Your Heart
by Madonna

0
7
Into the Groove
by Madonna

0
13
Express Yourself
by Madonna

That's all the Madonna songs we got.

That's all the Madonna albums we got.