In Justin Bieber’s song “Holy,” Bieber and Chance the Rapper join forces to convey the value of having a relationship through God.

What is the Main Meaning in Holy?

Justin Bieber’s Holy song meaning can be interpreted as the romantic storyline between him and Hailey Baldwin, how trials and tribulations led them to the marriage they’re blessed with today.

Understanding Through The Lyrics

Whew! When you think about it, singer and songwriter Justin Bieber’s life has been a complete whirlwind. Bieber became every teen, pre-teen, and tween’s major crush practically overnight. He achieved record-breaking fame in record-breaking time.

Fast-forward to 2020, and we have a grown-up, married Beebs. With his latest album, Changes, Justin Bieber gives you an intimate look into his life as a newly married man. But right now, I’d like to go deeper into the meaning of one song in particular – “Holy.”

Justin Bieber expresses a love strengthened by God in “Holy.” The lyrics suggest through the purity of his marriage to Hailey, Bieber has gained a closer relationship with God. I know we believe in God, and I know God believes in us, emphasizes featured artist Chance the Rapper.

The thing is, Justin Bieber’s blessed marriage didn’t just fall from the sky. Even though it may feel like it with how quickly the two got married. Even in the lyrics to “Holy,” Justin Bieber admits how fast it happened-

The truth is, Bieber went through some challenges to get to where he is today.

First off, we’ve all witnessed what growing up in fame and fortune can do to a person. Unfortunately, even Justin Bieber fell victim to some of the adverse effects of stardom. Bieber has opened up about drug-use, depression, and promiscuity in the past few years.

Justin Bieber Opens Up About Drug-Use

How old were Justin Bieber and Hailey Baldwin when they met?

Justin Bieber was 14 and Hailey Baldwin was 12 when they met.

While Bieber’s relationship with Hailey began when the two met in 2009, it started friendly. Bieber explains in his interview with Demi Lovato, how his and Hailey’s parents introduced the two. Both of their parents recognized the two had some things in common since they were both raised Christian. The two were teens at the time, and Bieber is a few years older than Hailey. It wasn’t until 2014 when the couple was seen at church together and admitted they were dating.

Bieber Explains in this Interview with Demi Lovato

Bieber and Hailey were still very young at this point in their relationship and went through a series of rocky ups and downs. Justin Bieber was beginning to go through depression and other personal struggles, which formed a wedge between the couple.

In an interview with GQ, Bieber explained:

“I know that in the past I’ve hurt people and said things that I didn’t mean to make them happy in the moment. So now I’m just more so looking at the future, making sure I’m not damaging them. What if Hailey ends up being the girl I’m gonna marry, right?”

When the two reunited in 2020, Justin Bieber felt deep in his soul how much he needed Hailey in his life. Just the sight of her reminded him of how he had missed her. During this time, Bieber also focused on strengthening his relationship with God again.

Bieber decided he wanted a better life for himself and a stable relationship with Haley. The couple decided they would fully devote themselves to a Godly relationship and remain abstinent until marriage.

“The first step pleases the Father Might be the hardest to take, but when you come out of the water. I’m a believer”

Bieber and Hailey maintained this promise for three months of dating and got married in a New York City Courthouse, in September of 2018.

Ok, yeah- Beebs and Hailey practically did run to the altar! But give ‘em a break. They had some serious history!

In his interview with Vogue, Justin Bieber said of the couple’s celibacy, God blessed me with Hailey as a result. Bieber believes that it’s in the purity and commitment to God shared by the two that makes the relationship feel so right.

What gives an even more in-depth understanding of “Holy” is the music video. Although the video may seem to give off another meaning to the song, what it really does is parallel and expand on the lyrics.

Holy Music Video is a Visual Representation of the Song

In the video, Justin Bieber partnered with Chance the Rapper to give a portrayal of the hard times faced in 2020. The video shows a young couple losing everything during the pandemic, including jobs and their home. What remains unwavering is their relationship. Through thick and thin, the two stick together.

Towards the end of the music video, you see the couple wearing dirt and exhaustion on their faces. They have no home, no jobs, and no food. Until a kind man stumbles upon them and extends an invitation for a warm meal with him and his family. You then see the heartwarming visual of two families, both full of love, coming together to pray around a table of food.

Interpreting this visual representation of the song, “Holy,” you can fully understand Bieber’s message of the power of love through God. If you remain faithful and strong, God will bless you with the human connection humans need for survival.

The Revelation of Holy Song Meaning

Whether it’s the romance or the reality of hardships in the song, “Holy” lyrics can be relatable to just about anyone. Justin Bieber intends to remind the listener that everybody has ups and downs in life and relationships. By strengthening your commitment to a better life and meaningful connections, you can overcome anything. 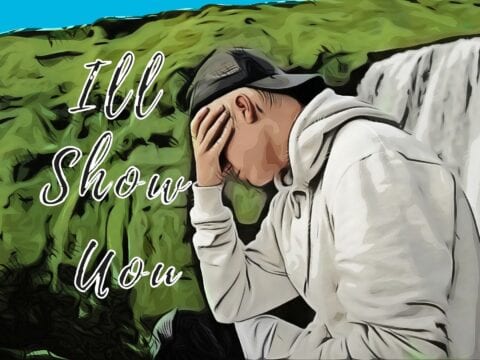