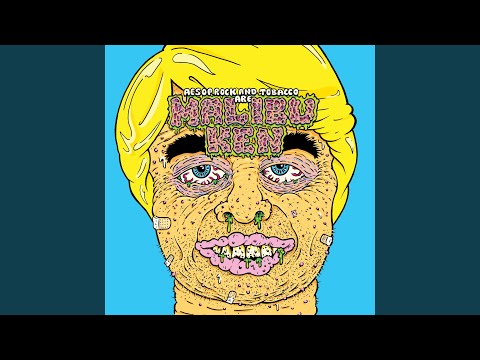 A is like a different type of animal
No brick road, no zip code Xanadu family
His and-what-army party in the panic room
Before he meet the man he feed his hands into the scramble suit
Glam channels wake up in a fantasy dismantled
We're championing vandals over Andy with the Campbell's
He the cold-hearted, old guard, Holy Ghost crowbar
The postcards only know Crayola no Rose Art
Ill communication aside I'll kick a train off a bridge
I'll smack a plane out of sky, I throw a car into the ocean
No one waving goodbye, place bets, 8 heads in the radio flyer
The kid TOBACCO is a face in the fire on the fucking mountain
The bass is like a struggle of defiance
Love and power for bettys and headhunters
Techies and chess-clubbers
All I do is eat bread and check suckers

Nobody safe chump, black plague, rail guns
Cachet of rat snakes coiled up in the bass drum
Dug graves with over-the-hill skate punks
Failures and flakes in the brain trust, pay up, eh!
My Bugs Bunny tunnel-out is perfect
Don't be there when we bubble to the surface, usurpers
I pay the rent in pennies and ride off into the ether
On a donkey painted like a zebra, take me to your leader
Detox, retox, see how he see-saws
Mistletoe of misanthrope, stick-and-poke sea dogs
You can't imagine all the misery we leap frog
I make rap I ain't a motherfucking peacock
Death raft floating out to sea
Under a single flaming arrow down to overcook the meat
And if a silhouetted man is seen emerging from the flames
You should probably treat him different even if he look the same
He isn't

I make a mean Suicide Big Gulp, sick pup
Google-eyes, splinter off the united witch-hunt
War and love, hailing from the home of the Anthora cup
And 40 nights of failures out to plagiarize the formula
Been seen petty spoils void steady acumen
I'd rather be avoided, a voice of the Voynich Manuscript
Boy-o, type to give a name to a sword
The skulls of his landlords hang from his horse
Medium kahuna, strange force around him
Hounds-man, scrounge for a sirloin to pound thin
I play my chess with undomesticated groundlings
We spend our afternoons forgetting how to downshift
"Aes ain't here man!", "Aes, I can tell it's you"
"Tell it's me from over there, this ain't a fucking petting zoo"
Brain cells peacing out, dentures in a Dixie cup
Devil trying to keep me down, somebody pick me up

Post your thoughts on the meaning of "Suicide Big Gulp".

What Does Suicide Big Gulp Mean?

My Humps
by The Black Eyed Peas

i
by Kendrick Lamar